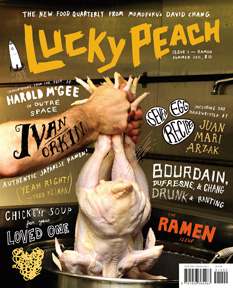 If you get a chance, pick up a copy of the new quarterly food / cooking publication called Lucky Peach. It's published by a really innovative literary / cutting edge group called McSweeney's. The cooking mind behind it is David Chang, who I always want to call Michael Chang, the tennis player. Chang has been the hottest young star-chef / restaurateur of the last few years.

A warning - the magazine is esoteric, at times raunchy, highly entertaining, informative, creative and geared primarily to high end cooking. BUT, there are a few really approachable recipes that anyone could tackle. Oh, did I mention the art? No. The journal is creative and  aesthetically brilliant  in several dimensions.

Anyway, you can find it most easily online. McSweeney's Lucky Peach. 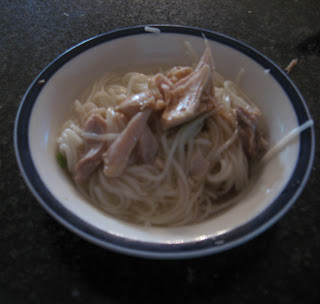 The first issue is focused on Ramen, the real thing from Japan, not our $0.11 packages. And eggs. Why eggs? No clue. But hey - they're the publishers, they can do what they want.

As my readers, you know that I won't publish recipes directly from other's sources. But I will share the concept of this recipe, which Chang really presents as chicken soup (with noodles), not as ramen. However, the Asian flavors make it ramen-like (especially to closet packaged ramen lovers).


The subtle Asian seasonings were sublime.
No comments: Links to this post 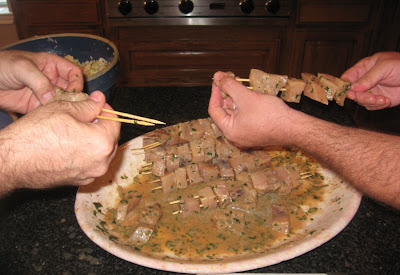 ". It's only available on Kindle, but if you have a Kindle it's worth far more than the 99 cents it's selling for at the moment.

The best thing I discovered in it was his technique for using two skewers to better grill chunks of fish. A single skewer allows a line of fish pieces to individually stick to a grill grate, then spin around the skewer when trying to remove it. Two skewers allows for a more unified solid 'rack' of fish pieces, which can better be released from the grill.

AWESOME idea. It will work for most firm-fleshed fish.

Bittman provides a recipe that marinates swordfish chunks in lime juice, sesame oil, soy sauce, cilantro and Tabasco. I used a sprinkling of red pepper flakes instead of cilantro. With freshly caught swordfish from the gulf, it was wonderful. 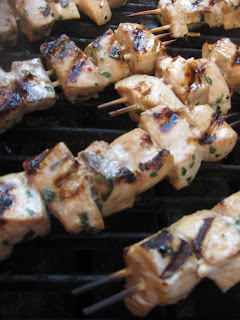 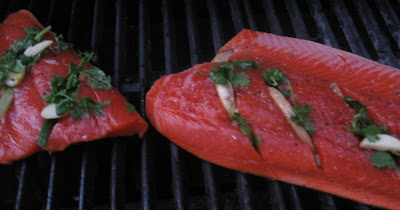 There's a common Sichuanese technique used for braising or roasting whole fish in which scallions, garlic, ginger and herbs are placed into large slits cut into the sides of the fish. But most everyday cooks are intimidated by cooking whole fish.

A great variation of the whole-fish, slit-flavoring concept is offered in Jamie Oliver's book and TV series "Jamie At Home

He cut slits into the flesh side of salmon fillets and stuffs them with fennel fronds. Drizzle both sides with olive oil, salt and pepper, then grill.

For my Sichuanese version I used scallion, garlic, ginger, cilantro, and drizzled with a light mixture of soy sauce, Xiao Xing rice wine, and sichuan peppercorn oil. If you don't have access to Chinese markets, you can substitute sherry and hot-sesame oil for the last two ingredients.

Over high heat, grill whole fillets skin side down for about three minutes. A careful flip and few minutes of grilling on the other side and you're done. 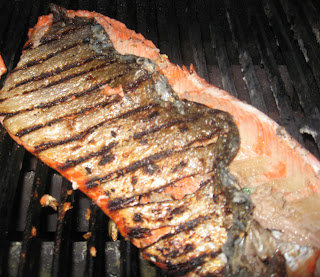 As the skin side was grilling it should have gotten charred a bit. Carefully, with a sharp knife, you can begin to peel off the skin while the other side of the filet is cooking. In the picture above, I've just begun to peel it back. Don't worry if it breaks into more than one piece.

Once the whole skin is off it's probably time to remove the filet from the grill. Now take the skin and put the non-charred side over the hottest part of the grill to crisp it up. This may take up to 4-5 minutes, and you should turn the skin to ensure both sides are cooked to a crispy texture. 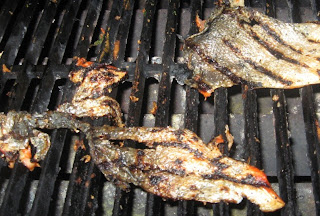 I'll admit it doesn't look too pretty at this stage. But I dare you to make it from the grill to the kitchen without tasting the craklin' and then having one more immediately.

You can break the craklin's up and sprinkle them over the whole salmon filet, or serve individual salmon portions with a nice size chunk of cracklin'.