Most of the cooking advice you read here involves getting a lot of flavor out of simple, fresh ingredients, using fairly uncomplicated techniques. Maybe it doesn't come across that way you every week, but I try to focus on the basics here, to encourage you to cook more often and (hopefully) with a little less effort. Rarely, if ever, have you seen something out of the ordinary, or made with unusual ingredients, or that uses advanced techniques.

This week is totally different.


Today let's try something with an exotic flair: Potted Cherries with Cherry Balsamic Vinegar and Tarragon. The recipe is adapted from Thomas Keller, who is generally considered the top American chef of the last decade. It all sounds a little impressive and complicated, huh? Well, it is. You'll need special equipment, you'll have to make one recipe first before you can complete the dish, and it needs to sit for days for flavor to develop. 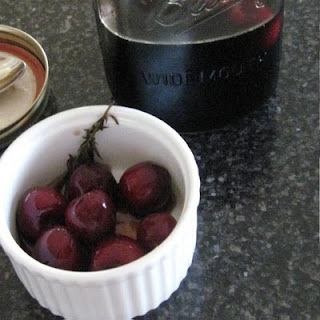 On the other hand, I'm pretty much lying.
The point is, even though this recipe originates from one of the greatest cooking minds in America, even though it sounds exotic, and even if the recipe seems complicated, this is actually SO simple. Yes, it's better if you let it sit for a few days, but it's pretty good right away too.
That special equipment? If you own a cherry pitter, a little device that pushes the pit through the skin, it will speed things up. If you don't, maybe you have one of those super tiny melon ballers (with a scoop about the size of a.....cherry pit). Lastly, you can use the tip of a paring knife, and twist it around the pit. Attack it from the non-stem side, it's easier.
The "make-first" dish? Two ingredients: balsamic vinegar and cherry pits. That's it. The main dish - five more ingredients - water, sugar, black peppercorns, cherries and tarragon. The recipe is in the next post.
How does one eat Potted Cherries anyway? Here are several ways they've been used at my house: