Homemade Vegetable Dip - An Opportunity to Improvise, Or Not 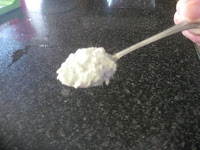 Margie needed a vegetable tray to share with her teaching team last week. Instead of putting out a jar of commercial salad dressing or dip I made this for her. It was good. It also got me thinking.

It may seem that I just told you I can't cook without a recipe. That was litaerally true for a long time, but now, not so much. Let me explain.

When I learned to cook seriously, I learned a lot from watching TV cooking shows. Back in the 1980's there was a lot more true instructional content on TV. I also studied a few cookbooks. Actually, very few. Each one was one of the best of its kind. Marcella Hazan's Italian cookbooks, Diana Kennedy's Mexican work. The Silver Palate books were current at the time and rather good. The New York Times Cookbook was almost a bible - as it covered so much ground. Today's equivalent is How To Cook Everything.

Most important to my learning curve was anything by Pierre Franey. He was co-author of the NYT Cookbook and provided the 60 Minute Gourmet column. He took classic techniques and recipes, made them approachable and modern, and did so in a reasonable amount of time for the home cook.

With all that great instruction and hundreds of quality recipes in just a few cookbooks, I rarely improvised. Why? I wanted to learn from them first and get really good in the kitchen before I improvised.

Back then, I'd often make the same recipe several times, making a few mistakes along the way. But at some point in the first two, three or four times I made the recipe, something would click. I'd nail a technique, or master the subtleties of an ingredient, or more simply - just plain get it right.

At the time, I thought I needed to pay my dues, learn techniques, master recipes....THEN I could improvise. That's not a way to quickly earn your professional chef stripes, but my approach worked for a serious home cook (according to the people who eat my results these days).

What does this have to do with vegetable dip? How far off track have I rambled? Not far, really. I'll boil it down like this:

Why? Because I believe if you just casually throw ingredients together you'll get casual results. It may even be satisfying. But if you follow a master recipe at first, one that's got great proportions, good balance and multiple layers of flavor, you'll be rewarded on many levels. After that, tweak it and make it your own.

Gospel? No. Decent advice? I hope so. 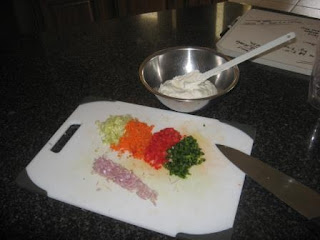 
Make this dip a day in advance to let flavors develop. Serve with sliced vegetables.
* The vegetables you chop for the dip should be chopped VERY finely - 1/16" or so. If that sounds a little oppressive (or your knife won't cooperate), chop the vegetables coarsely, then pulse in a food processor.
** I wish I could grow fresh dill in my herb garden - it doesn't seem to be able to handle the Texas heat. If you have it, use at least 2 tablespoons.