Remember the Naked Chef? He Grew Up. 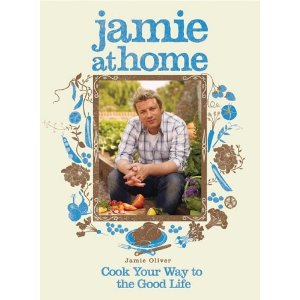 There was a show on some years ago called The Naked Chef, featuring Jamie Oliver. At the time he was a 20-something, high energy, flash in the pan, or so I thought. The title, the opening scenes where he zipped around on a little moped/scooter/thing, the frenzied British banter, it all did nothing to connect with me. I may have look at an episode or two, but even if the cooking was good, I just didn't want to like this guy.

Guess what? Jamie is grown up now with a cozy house in the country where he makes family meals for his wife and kids. He's committed to home gardening, taking it almost to a commerical scale. The frenzied energy is still there, but it's focused directly on the kind of cooking I keep preaching about: fresh ingredients and fundamental techniques.

OK - his imagination and flavor combinations are so far beyond my creativity that I'm embarrassed.  But this is also why I encourage people to rely on a small library of excellent recipe sources, rather than continually wandering the world of improvisation with average results.

In his latest book, Medium Raw, Anthony Bourdain of Kitchen Confidential and No Reservations fame, one of the most influential food celebrities, puts Oliver on his short list of cooking talents he respects.

Funny, now Jamie Oliver is like Gordon Ramsey to me. I saw him, wrote him off, only to later learn that the TV exposure, the restaurants and publication empire was based on a foundation of truly excellent cooking and innovation.

I first saw a couple episodes of his current show, Jamie At Home on the cooking channel. The first two I saw had such delicious looking recipes that wrote them out by hand from the TV episode. I made a couple of them right away. A few weeks later I ran into a companion book for the series.

Rather than give any "lessons" or advice this week, I'm just encouraging you to watch his show or buy his book. Besides many, many great recipes for any level of cook, it's beautiful in photographic and graphic design terms. The book also has extensive text on growing and harvesting a range of vegetables at home, including rhubarb, cabbages, carrots, lettuces, actually, more than I can reasonably list here.

In the next post, I'll share the concept of one his recipes, which I made three times in the first week I had the cookbook, "Proper Chicken Caesar Salad". It uses a simple, but incredibly effective and innovative technique.

Some of the other recipes I've made are Kefta Kebabs with Pistachio and Spicy Salad Wrap, Rhubarb Bellini, Warm Strawberries with Pimm's. I plan to make Asparagus Potato Tart, Zucchini Carbonara and Hot and Sour Rhubarb with Crispy Pork and Noodles. Again, you'd be surprised that these recipes have fewer ingredients and less complex techniques than you'd ever imagine, based on the titles.