I haven't shared too many recipes lately, so allow me to catch up a little with this simple one that I accidentally created for a recent dinner party.

After making a few complicated appetizers I was prepared to make tortelloni from homemade pasta and fill them with an herbed goat cheese mixture. The pasta dough was ready but I kind of ran out of time. Actually, I lost the teenaged helpers I had been counting on. No worries. This wasn't some fancy dinner party, it was a casual get together. Remember my holiday cooking tips? "#10 - Don't sweat anything".

So we cooked some good dried pasta, tossed it in olive oil, salt and pepper along with a very small amount of the herbed cheese filling that had been intended for the tortelloni. Then dollops of the herb mixture were dotted onto the top of the warm pasta. Some of the mixture melted, some stayed together in....dollops, I guess. I did top it with some strips of oven dried orange peel. Over the top of all this I squeezed the juice of half an orange.

I used a small ball-shaped pasta called Acini de Pepe, which I understand to be Italian for "peppercorns", which is the exact size and shape of the pasta. This is a really good pasta to use for a crowd, because even just a pound of it will a lot of people as a side dish. Why, you ask?

Have you ever wondered why angel hair pasta seems to be more filling than say, fettucine or spaghetti? Maybe not. But most people think so. The reason is that there's more surface area in one pound of very thin pasta than there is in a pound of larger pasta. Thus, more water is absorbed, the pasta gets a little denser, and you get a little fuller. The peppercorn pasta has this same characteristic. We served seven adults and had leftovers, even though most people went back for seconds.

1/2 cup ricotta cheese
4 ounces plain goat cheese
3 tablespoons milk or cream
1/4 cup good quality parmesan
1 teaspoon fresh thyme
1/2 teaspoon fresh rosemary
4 fresh sage leaves
--- If using dried herbs, use half the amounts and just a pinch of sage
1/2 of one orange
1 pound Acini de Pepe (small ball shaped) pasta
Note: since the advent of microplane graters, I rarely use a traditional zesting tool. However, to cut the long strips of orange rind I mentioned I use one. There might be a microplane version, but I haven't seen one yet. If you need one of these tools, here's a good one from amazon: OXO Zester on amazon.com. 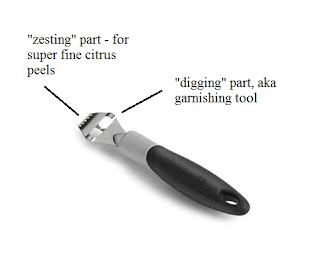