When supermarkets first created prepared deli trays of vegetables and dip, shrink wrapped and shipped in from a central prep factory, I was a little surprised. I know some of you were not born when this started and deli trays, say from a REAL deli, are nothing new. Convenience? Yes. Expensive? Yes. Are the veggies fresh? Probably - at least fresh enough to stomach.

Of course, you'd never find me suggesting such a shortcut. It just doesn't take that long to rinse, peel and chop a few veggies. It's also very easy to make a quick dip. I'll add a recipe for you.

But what really, really gets me going are products such as jarred, diced garlic. Or prechopped onion. Plastic tubs of mixed onion, celery, carrot. Pre-shredded cabbage or slaw mix.

If you're going to bother to cook at all, the 1 minute it takes to chop an onion or smash a garlic clove is not your big time loss. I guarantee that prepared products like these represent two things:

Pre-Chopped Garlic - Yuck
I bought a jar of pre-chopped garlic a year and a half ago, when I was making some Cooking Light recipes verbatim from the magazine (as a test). Last month I pulled the jar out the fridge - a year and and half old - and the product in the jar open 18 months ago - looked the exact same as when I first opened it. Try that with a few garlic cloves and olive oil. Not gonna work. Do you think there are some  preservatives in that jarred goo? As they say way up north, "You Betcha'". 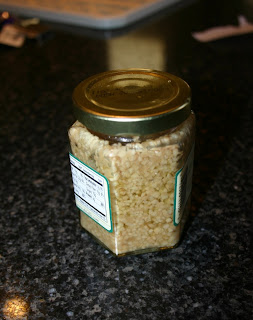 Chopping garlic on your own is about as simple as can be......once you decide to use a chef's knife in the process. I used to neatly trim the root end off a garlic clove, then peel off the skins, taking two or three steps in some cases to peel one clove. This resulted in perfectly peeled cloves. Which 90% of the time I diced up into tiny pieces. I used to believe that this controlled the amount of liquid released from the garlic, as opposed to the smash and peel method. Now I don't.

To smash and peel, break a clove off the head, place your chef's knife over it sideways - parallel to the cutting board - and smash down on the side of the knife with your fist. Or you can press firmly until the skin cracks. The skin will break away with almost no resistance at all. I then sometimes trim the root end, depending what the garlic will be used for. This method is about a 90% time saver.  If you are using multiple cloves, smash them all at once, then remove the skins. 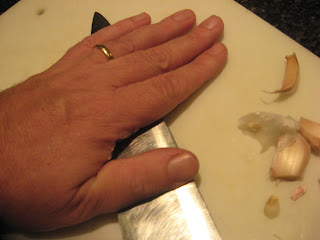 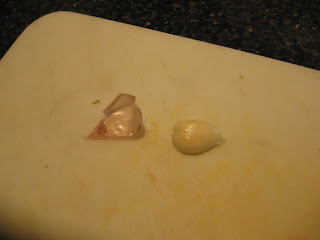 Tip for working with garlic. If you are smashing and peeling a large number of garlic cloves (say 6 or more), your fingers and hands will get a little sticky and the skins will begin to cling to you. A very quick rinse of water will eliminate the stickiness easily as you continue with additional cloves.

One last garlic comment. Generally, the more closely the peel sticks to a clove of garlic the fresher it is. Old garlic peels easily.