A Good Recipe From Cook’s Illlustrated

Yesterday I made a dish the whole family really liked – Grilled Chicken Breasts Stuffed with Salami and Mozzarella. In addition to the meat and cheese, there was a small portion of flavored butter, using garlic and basil. The pickiest eater in my house admitted it was "actually pretty good" and cleaned his plate. That's high praise. 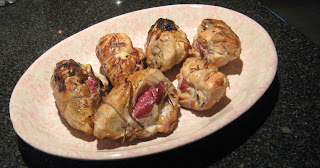 The recipe was kind of published in Cooks Illustrated magazine this month. I say kind of, because they did an article about stuffed chicken breasts. But this version of the recipe was only available online. It actually took a bit of work to be able to find it on their site. Even though the link published in the print magazine was to their home page, you had to poke around on "Current Issue", "Stuffed Chicken" and then the recipe variation. That sounds straight forward, but the chicken recipe is also on their home page, and if you click there you get taken to a "Subscribe here" page.

I'm quite a fan of what Cook's Illustrated publishes, and highly recommend the magazine to any level of home cook. I've been a subscriber since Issue 2 (they're on 105 currently). But they charge for online access even if you are a print subscriber – so I can't search for past recipes, etc. Or they write about the process used for a taste test, but won't show the results unless you're an online subscriber. Believe me, there's no way I'm paying for the same content twice.

Don't get me wrong, I love their magazine and their approach to creating awesome recipes – they challenge accepted techniques and test extensively to get them just right. But I've been pretty cranky lately, so I'm whining about another frustrating visit to their site. I'll get over it.

ANYWAY…..this was a really good recipe for a lot of reasons. Below you'll notice the phrases "multiple kinds of flavor" and "[good] proportion of ingredients". These are two of the most important aspects of higher quality cooking. Most recipes don't achieve either of those goals.
The variations they published were stuffed with:
The cooking technique alone is not novel, but the combination of several steps serves very well for stuffed chicken in particular. The method is:
You may be well versed in using this technique, known as a two-stage fire. However, there are some subtle improvements suggested here:
If you want to make this recipe, it's not too hard, it's a little time consuming, but the results are worth it. You can get their recipe here (but not the helpful illustrations about butterflying, building your fire and the tying method).

As I mentioned earlier, there are lots of good things about this recipe. But I have a hard time recommending a pretty time-consuming recipe that involves brining (I didn't mention that yet, did I?), butterflying and tying up poultry. So I thought I'd use the same ingredients, some of the techniques and make it into a simpler dish, and incorporate it with pasta to create an almost one-dish meal.

The recipe will be published in the next post, which I guess I'll call Pasta with Grilled Chicken, Salami and Mozzarella. Clever, huh?

If you're interested in subscribing to Cook's Illustrated click here (and I'll get a few cents referral fee – yeah!). Some of the other good articles and recipes in their issue this month are: