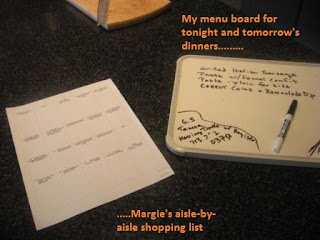 You know that old saw, there's only one rule - there are no rules. It's pretty true for cooking. You can do anything you want. However, I do recommend that you focus on developing fundamental techniques, use high quality fresh ingredients and let a small number of good recipes help you along.

Last week I touted the value of a weekly menu, then gave a little update or two along the way. It was a great approach for our family. We had many fresh, interesting meals last week from that menu, then followed it up with hosting almost 30 people for a Homecoming dinner. Monday, we even had a little Bears-Packers Monday Night Football party, and a decent approximation of an Italian beef sandwich.
How did the menu work out? Here are some observations:
Note - this week, I'm not using a menu at all.  Was it bad advice? Not at all. This week we used leftovers on Monday to create our beef sandwiches. Tuesday was a high school swim team pot-luck dinner. As to the rest of this week we'll:
So where's that high-falutin menu planning now, you  ask? Dare I say "every other week"? Yes. Sort of. If last week's menu were simpler, we'd probably do something like that again. If this week weren't so hectic outside the house, we'd cook more elaborately.

The amount of menu planning kind of reminds me of how a baby or toddler eats. They might eat vegetables for five meals in a row, spitting out all other food offerings. Then for the next few days they'll eat nothing but fruit and meats. In the end, it doesn't matter too much, as long as over a shortish period of time, they get enough vegetables, fruit and meat.

I don't have an exact number in mind, but it you were to cook a fresh meal, say 12 times a month, you'd be cooking and eating well. Picture leftovers for most (say 9) of those meals, a few nights out - either dining or grabbing something quick on the run (like a pot luck dinner for the swim team) - and a few nights of truly convenient cooking. Like sandwich night. Or baked potato night. Or breakfast for dinner. Do the math and you've eaten quite well all month long.

And having a menu for the upcoming week, even it it's kind of loosely organized, will go a long way toward cooking that often. So actually, you do need a stinkin' menu. Here's a last story to demonstrate.

I was in the grocery store yesterday and saw a 30-something mom with two preschool aged kids in her cart. She only had about four items in the cart (yet a quarter of the way through the store), no shopping list, kids climbing all over the place, while she stood motionless, apparently thinking about what to make for dinner. No shopping list, anxious kids. Apparently, no plan. That doesn't help making cooking enjoyable. Be prepared.