68 Fresh and Healthy Recipes ** A Favorite Article from 2010

This is another favorite column that originally appeared in Be A Better Cook last year.
I'm providing some repeats for the new group of subscribers who began reading this blog recently. 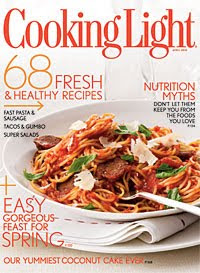 "68 Fresh and Healthy Recipes"
Fast Pasta and Sausage
Tacos and Gumbo
Super Salads
Nutrition Myths
Easy Gorgeous Feast For Spring
Our Yummiest Coconut Cake Ever
These headlines are from the cover of this month's issue of Cooking Light - a true smorgasbord of teasers and come-ons. Tacos and Gumbo? At the same meal? I hope not.
I've had a number of people tell me how frustrated they get when they page through a cooking magazine. It may be that everything looks so good they have a hard time deciding which dish to cook. Or, as they scan so many recipes they're just not sure which ones would turn out well for them. Or which are too hard or too slow to make. Whatever the case, friends have told me they get information overload. 68 recipes (more than 2 per day) sounds like overload to me.
Cooking Light is the most successful cooking magazine on the market today, as it draws in more advertising pages than any other title - by far. Cooking Light isn't the kind of resource I've relied on for recipes or ideas in the past. But since it is read by so many people, I subscribed for a while and  made a few dozen of their recipes over the past 6 months.
Here's what I've learned:
Overall, I'm not too impressed with Cooking Light. The recipes variously call for expensive convenience ingredients such as pre-chopped garlic or grape tomatoes. Yet the same recipe may then specify a complicated or unnecessary steps to perform, thus losing time you "purchased".
I also think Cooking Light recipes generally call for too many ingredients. Why is that? I think they're "throwing the kitchen sink" at the recipe to drive out flavors. Or they know that most people will skip a few ingredients they don't have on hand - so they're hedging their "bet" on the recipe. Yet, I've found most of their end results to be pretty bland. Frankly, the recipes just aren't that good.
So what does this mean to you?
Of course, I'm not saying all the recipes are bad. However, I don't think I made a single one that didn't require some sort of modification. I'm not suggesting modifications "....to suit my taste....", but rather modifications to keep it from being a fairly disastrous or inefficient or overly costly recipe.


So this week I share a recipe from November's Cooking Light with you, with one simple modification: Pasta with Carmelized Onions. See it in the next post.


"Add onion. Saute 15 minutes or until almost tender. Reduce heat to medium low; cook until deep golden (about 20 minutes)."
Does that mean 15 minutes, plus another 20? Or does it mean 15 minutes, plus five more to total 20 minutes. Maybe because the 20 minute instruction is in parenthesis, it's throwing me. If it weren't, I'd clearly treat it as an additional 20 minutes, because it would be presented in a similar manner to the first timing instruction. I'm not trying to be too picky - but for a cook without a lot of confidence and experience in the kitchen, would he/she really know what to do? Do you?
BTW - the correct approach is 15+20. Carmelizing onions for a little over 30 minutes is the best way to get delicious, sweet flavor from them. They're awesome.