The Sharper Your Knife The Less You Cry 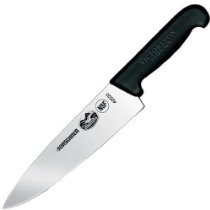 Probably the single most important kitchen tool is a sharp chef's knife.  Most experts say that a good cook can survive with just a chef's knife and paring knife. I think that unless you have pretty small hands, just the chef's knife will do for 95% of prep cooking.

Notice carefully the adjective 'sharp' before knife. Even the most well constructed and expensive knives are worthless if they are not sharp. Professional chefs are almost maniacal about knife sharpness.

Before we go over the benefits of a sharp knife, let's make sure you know how and what to do to keep a knife sharp - there are two aspects to it.

You do not need an expensive electric sharpener. Many of these tools are ineffective, hard to use and sit idle even when you ought to be using them. The every day/every week task is easy, and that annual-ish resharpening breathes new life in your favorite knife.

You also don't need an expensive knife. The current wave of Santuko knives, designer ceramic bladed knives and so on.....all fine. But mostly this is the result of marketing, not some new breakthrough in cutting. A moderate quality knife, kept sharp, is far more important than a few hollow ridges or flashy ceramic colored knife.

How Sharp is Sharp?

Your knife should be SO sharp that a tiny slash with the tip of the blade can slice a fresh tomato, or rip through tough plastic packaging. Except for some of the toughest root vegetables - like turnips or rutabagas - a chef's knife will almost glide through. This makes cutting faster, easier, less tiring and even safer.

A woman named Kathleen Finn wrote an account of her training at a Paris cooking school, titled The Sharper Your Knife the Less You Cry

. Nice book. But the title holds an accurate phrase, in a way.
When I started cooking seriously after college, a very good knife was one of my first investments.  I bought a Portuguese knife from Alfred Zanger company, which unfortunately no longer import knives. However, I still use it regularly (and got it resharpened last month).

When the Zanger knife took an unplanned vacation in Wisconsin for a year (really, I travel with my knife and once forget it at my friend John's place), I purchased a very inexpensive and popular Swiss chef's knife from Victorinox.  Frankly, it is equally as good as the Zanger, which is equivalent to a $100+ German knife.

If you want to read more about my recommendations for important cooking tools, read this article: Kitchen Tools You Can't Live Without.