My friend Tim made a chicken and pasta dish for his family last week, and despite high ratings from reviewers on epicurious.com, he thought it turned out poorly. In fact, his wife Jennifer disliked it so much she wouldn't eat it. So Tim turned to me for a little advice.

I told him he has too many swing thoughts before he hits his drives, and he ought to take more time to line up his putts. But that wasn't the kind of advice he was looking for.

The reason Jen didn't like the dish was the overpowering amount of Gorgonzola it contained. He also wasn't pleased with the color, which came from using the oil from jarred sun-dried tomatoes. I took a look at the recipe he used (you can link to it here: Pasta with Chicken, Sun-Dried Tomatoes and Gorgonzola Sauce) and saw a few things I'd do differently.


To put my money where my mouth is (or should I say put my mouth where my mouth is?), I made my revised version of the dish last week. Frankly, I think Jen would eat it with the changes I made. In fact, Tim and I are playing a golf tournament this weekend, and are having a family dinner Saturday night. This dish will be on the menu for sure.

You might read this and think, "Who cares, Tom. So, you revised a recipe to suit it to your taste." True, but I think there is a key differences in what I recommend. I think my version provides a fresher, better balanced profile of flavors. And what family of four would really be satisfied with just over half a pound of chicken mixed into one pound of pasta. I'm not recommending big portions and overeating, but that ratio is just poor.

Tim's story reinforces one of the most important principles I use to cook well: beware of random searches for recipes online. Just because the ingredients sound like a great combination doesn't mean that the recipe is well composed.

I recollect similar recipes as this one from my favorite old cookbook, Cuisine Rapide by Pierre Franey which are well composed, and use similar ingredients and techniques. You might want to check out that book sometime. It's out of print, but copies are still available via amazon. 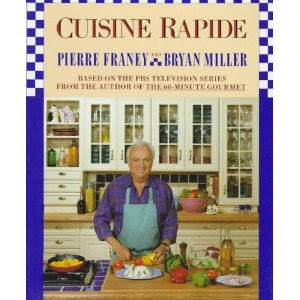