My Audition for Master Chef - The Audition

The audition for Master Chef required that each contestant present a single plate to the judges, served at room temperature. We'd have 5 minutes to plate our dish, but no ability to cook or warm the dish. I chose to compose a dish in which three of the four components were supposed to be served at room temperature; in fact, were better at the temperature. All I had to do was transport a small jar of cooked shrimp and keep it chilled in the hotel refrigerator overnight.

When I got to the audition site, I found a line of 50-75 people bearing all manner of coolers, warmers, boxes and even grocery bags. I settled into the back of the line and eventually struck up pleasant conversations with my fellow cooks. We were all nervous, and it was apparent that everyone loved cooking immensely. But we clearly had different levels of experience and approaches. 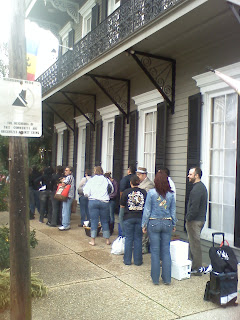 One fellow contestant was an attractive Hungarian-born girl, Nikoletta, who seemed as well prepared as I was. She was toting a portable refrigerated cooler like the one I used to transport my chilled shrimp safely from Houston to New Orleans. Another was a middle aged character in a tan suit, with brown and white saddle shoes and a snappy fedora. Mardi Gras beads hung around his neck. I wrote him off as an attention seeker and doubted he'd present a decent dish.

After about an hour and a half wait I entered a courtyard to submit my application, photos of myself and of my dish. TV cameras and boom microphones began to show up sporadically. The crew took a few shots of some applicants and returned to the audition area. They briskly hustled back when a (very) buxom brunette in a tight sweater, tight black pants and stiletto heels arrived at the application desk. No surprise there.

I was issued number NOLA-64 and then waited anxiously for the next spots in the judging area to open up. When my number was called I entered a room containing seven folding tables covered with white table cloths. Three contestants were situated at each. Food judges and production staff were engaging with the participants in a somewhat unhurried manner. That made me feel good - they weren't rushing through this thing.

I had expected that at a New Orleans audition there would be a plethora of etouffee's, pan fried fish, maybe some gumbo or dirty rice and an overdose of shrimp and crawfish. With a quick glance around the room, it turned out to be an accurate guess.

The fellow set up next to me had a crusted speckled trout atop "creole spaghetti". His presentation was excellent, as he used a squeeze bottle to fill, then overflow cherry tomatoes with a remoulade. It looked like a great dish, but it also looked very much like many other dishes I could spy around the room.

I wrapped up my plating, hands not too steady, but not truly shaking either. I saw the camera lights go on. They were interviewing Nikoletta. She was clearly quite nervous when speaking. The producer even asked if she was nervous and why. I couldn't hear her answer, but did I notice that her dish was beautifully arranged, with steam rising above it. Ahh....she had used the heating function, not the cooling function on that portable device. 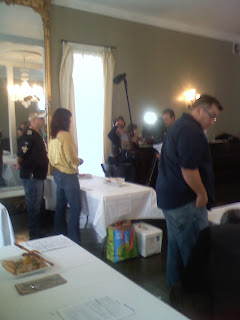 The camera next went onto Fedora guy. Not a surprise, really. But what was a surprise was his dish. He had four shrimp, skewered dramatically lengthwise, balancing atop a half ear of corn on the cob. The plate was filled with a traditional "mache choux", a Cajun corn and vegetable stew. He too was asked if he was nervous, which he was.

He also stated that the dish was his "go-to dish" for entertaining. That's just what I wanted to hear - that this dish might be the best he's got, and it was simply a good version of a local dish. I think the contestants are going to need much stronger "chops" in the kitchen, and not be quite that nervous with a camera on them.

As the interviews continued, I waited around listening to the questions from the food judges and producers. My favorite conversation:

Next up: My Audition Dish