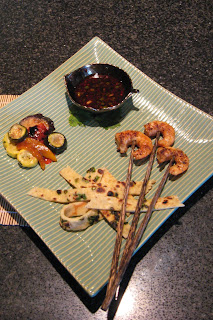 The food judge appeared in front of me. She was an attractive Asian woman named Kim, about 30 years old. She was quite comfortable to talk to, despite the nerves I could feel running through me.

She asked what I cooked, and quickly said she'd not be tasting any more shrimp. She'd already had enough for the day. I mentioned that if she knew the wonderfully numbing taste of Sichuan peppercorns, she'd understand the shrimp easily. Thankfully she was familiar with the magical peppers.

The highlight of my dish was the dipping sauce, which is what I wanted her to focus on. I mentioned that it was made in an authentic Sichuan manner, building up multiple types of pepper and spices to create a unique overall taste. I had five kinds of pepper in my sauce: red Sichuan peppercorn infused oil, Sichuan chili black bean paste, a pinch of dried roasted red peppers, a pinch of ground roasted Sichuan peppercorns and a tiny dash of white pepper. While this sound incredibly spicy, it actually is not.

She dipped her fork into the sauce and tasted. She complimented me on it (good sign) and asked what I used to balance against the spicy flavors. It was ShaoXing Rice wine, which tastes a lot like dry Spanish sherry. There's also soy sauce and a dash of sesame oil. The only other ingredients were finely diced ginger and a smattering of scallion slices. Kim asked if I had used Chinese 5-spice powder - she thought she could taste it. But I had not. All those flavors built up on their own to create a wonderfully complex mix that causes your mouth to tingle slightly, the characteristic of Sichuan peppercorns.

The next component on my plate were scallion pancakes. I told Kim that they were a common street food, which I thought would match this dish well. I had cut the pancakes into wide ribbons so they could be picked up individually and dipped in the spicy sauce. She ate a half inch portion off the end of one. Of course she did - how could anyone taste so much food in a day?

I also mentioned that I had never made several of the components of my dish before, including the pancakes. She complimented my on my bravery to cook something new for the audition. Yet that's indicative of how I cook. I certainly wasn't going to bring a signature dish, because I don't have any. As I composed this dish, I knew that the pancakes were a good component to contrast the shrimp and to use the sauce. Plus, I fried up some store-bought scallion pancakes as a backup, just in case.

Kim tasted my marinated vegetables, choosing a small zucchini, I'm guessing mostly because it was small. She complimented me on the vegetable, and now that I think about it, the pancake too. I was definitely feeling good, because I didn't hear that praise when she tasted the speckled trout dish next to me.

She asked what lead me to choose this dish. I indicated that I figured there wouldn't be too many Chinese dishes at an audition in New Orleans, that I loved these flavors, and that I learned about them as a result of travelling to Sichuan to adopt my youngest daughter.

Kim moved on, and a while later - a nerve-wracking while later - a producer came over. We quickly established that she was the person who had called me the night before to confirm that I was coming to the audition. How cool - I wanted to meet the person I talked to. Serendipity? I sure hope there's plenty more in this process.

She asked my why I wanted to be on Master Chef. I told her that I've loved food and cooking all my life, have dreamed of it being my career, but never have had the nerve to open a restaurant due to my lack of actual restaurant experience. She tasted a shrimp and a pancake strip and liked each! She seemed ready to go, but I wanted to sell myself one step further. So I repeated to her that this was not a specialty dish, and that I had never made the scallion pancakes or this exact version of the vegetables before. She didn't seem too impressed and I could tell she wanted to move on.

But to my relief, before she left, she leaned in closer to me and quietly said, "After you pack up your dish, please go see the girl in the blue shirt across the room". While I didn't immediately assume it meant I'd passed, I knew it had to be good.

When I got to meet the blue-shirt girl, I was truly nervous - this had to be very good. The first thing she said to me after finding my application was, "Congratulations - the judges liked your food.". Wow!! I had made to the next stage. She and I determined a time slot for an on-camera interview.

Though I focused on remembering her name when she introduced herself, I had become so excited after getting the news that I forgot it. Nor can I remember it now. So I've forgotten the name of one of the most important people in the process. Nice. Well, I'd bet most of the people who got their "green tickets" were in the same state I was.

That's where this story pauses. My interview is tomorrow in New Orleans. I'll be sure to share what happens next. And because for the next day or so I'll be in "another place" - in many respects - I'm dashing off this story in place of the traditional weekly newsletter. I hope you enjoy the substitution.

Next up: Recipe for Scallion Pancakes