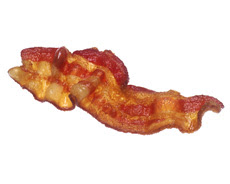 This week I'm pleased to introduce a guest columnist who will share her thoughts about.....bacon. Rebecca VanDolzer is a student in the restaurant and hospitality program at the Conrad Hilton college at the Univeristy of Houston. She's an avid and accomplished home cook, and since she's from, let's call it "a different generation" than I am, she'll add new perspective when she shares her thoughts with us. Welcome Rebecca.

Most people would agree that bacon is held in pretty high regard here in the United States. Not only is bacon a part of the classic American breakfast, there is currently an emerging "pork cult", so to speak, sweeping the nation. Chocolate covered bacon is sold in high end sweet shops and bacon has been added to cocktails by infusing it into spirits. Bacon blogs abound. One of the best is The Royal Bacon Society. There are even restaurants completely dedicated to the love of pork, lead by chefs sporting pig tattoos (men and women, including a trio in Houston who run the restaurant Feast).

The high-falutin’ pork trends sound intriguing, but I’m partial to a good, old-fashioned piece of perfectly crispy bacon. Despite having tried the best parts of pork, prepared by techniques from all over the world, nothing can beat the wonderful simplicity of my old friend bacon.

I know that cooking bacon is a simple concept in theory. Fry it up in a skillet until it's golden brown and you have yourself a treat. But ooooohh, what a mess!! By the time you are done frying bacon there is grease build-up all over your stove and even on the counters and walls. How does it get on the walls? Not to mention the battle scars that the hot grease leaves as it jumps out of the pan onto your arms. Don’t cook bacon in shorts – trust me. Is it really worth it? I can't tell you how many times I have struggled with this bacon battle. Countless band-aids and grease soaked towels later, I decided to fight back. I even eventually won the war.

I thought to myself, there has to be an easier way to enjoy this delicious piece of meat without all the work and pain. Ah ha! Just two things are needed. A rimmed sheet pan and the oven. The perfect idea!

I placed the bacon strips on the sheet pan, cranked the oven up to 400 degrees and waited. It seemed simple enough, and it actually worked like a charm. No more mess and no more pain. It only took 10-15 minutes for perfectly crisp bacon. Then you can just rinse off the pan and throw it into the dishwasher. Amazing!

This approach even works if you prefer your bacon on the limp side. Just leave it in for a little less time and you have yourself a nice flexible form of the beloved meat. Now even the most impulsive cravings for this salty piece of pork can be satisfied with ease. 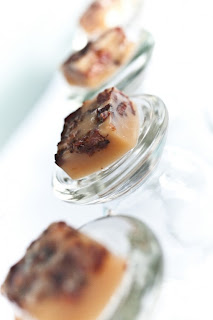 "I had rather be shut up in a very modest cottage with my books, my family and a few old friends, dining on simple bacon, and letting the world roll on as it liked, than to occupy the most splendid post, which any human power can give."
— Thomas Jefferson